The biggest show to date topped by the James Gang reunion

Joe Walsh’s “traveling rock and roll circus”, otherwise known as VetsAid, returns to the live stage this weekend with its largest production to date in terms of event size and post-COVID challenges to put together the cast of stars, according to Christian Walsh.

Christian is Joe’s son and has been responsible for organizing the benefit concert since the first VetsAid in 2017. The sixth edition is Sunday (November 13) at the Nationwide Arena in Columbus, Ohio, with an all-Ohio bill featuring Dave Grohl, Nine Inch Nails, The Black Keys and The Breeders.

Headlining is James Gang, the seminal Ohio band of which guitar legend Joe Walsh was a member in the late 1960s and early 1970s with bassist Dale Peters and drummer Jim Fox. To prepare for VetsAid, the trio shrugged off the rust at two Taylor Hawkins tribute concerts in September after they hadn’t toured together since 2006.

Most recently, they have been rehearsing for VetsAid. The day after the benefit show, Walsh flies to St. Louis to join the Eagles for the start of their fall arena tour at the Enterprise Center.

The pandemic has resulted in VetsAid’s last two shows converting to streaming events in 2020 and 2021. Last year’s concert was supposed to take place live in Columbus until COVID numbers spiked again, and became “The Basement Show” which was streamed live at Joe’s Walsh House in California.

This year, for the first time, the concert will be streamed from the arena. The online fee is $ 20. Consumers can expect full sets from all five acts over a span of over five hours.

“Tickets are practically sold out in one day, except for the front row, and it never happened to us,” Christian said. “Most of the hotels in the Arena District are sold out and we have had to distribute our staff among five hotels. It has never happened before. We are ready for this “.

The one thing Christian wasn’t ready for in putting VetsAid 2022 together was addressing the same issues reverberating in the tour industry with supply chain and manpower. However, it was a labor of love for father and son.

“Basically we have four arena shows in one venue in one night,” Christian said. “It was hard as hell. Everything is more expensive. The work went up by a good 20%. No offense to central Ohio, but they don’t have access to many of the things you need to put on a show, like risers and curtains. We have to be creative to find equipment and personnel. Some of our video and audio suppliers have had to hire staff from tours around the world to work on this event. “

Christian said it helps that everyone loves his dad and the participating artists all cite James Gang as an influence on their career, including Nine Inch Nails, the first act to commit to the event. 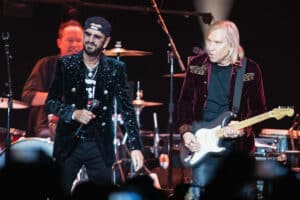 “NIN was a milestone,” said Christian Walsh. “I thought they would turn down our offer, but they said (frontman) Trent Reznor has been a huge lifelong fan of him. It touches me deeply that this small Ohio band that has been with that lineup for three years has made such a difference in rock music as we know it today. “

Alone, Joe Walsh spent his formative years in Columbus, where his father, a US Air Force flight instructor who died in a plane crash in Okinawa in 1949, bought him his first guitar. Walsh went on to attend Kent State University and eventually joined the Cleveland James Gang.

Grohl, of Warren, Ohio, was a no-brainer after publicly affirming his admiration for James Gang multiple times. The same goes for the Black Keys. The Breeders covered James Gang’s songs.

“I grew up listening to classical music,” Christian said. “It was for me that he opened my eyes and moved me.”

Christian, whose full-time job is working on national political campaigns, essentially coordinates VetsAid alone with business partner Lori LaFave. The Walsh family acts as a promoter of the event along with VetsAid, the nonprofit that Joe formed in 2017 to help veterans in need.

Joe Walsh, with the assistance of the Combined Arms Institute, which researches and approves suitable organizations, selects the groups that receive money from concert proceeds. This year the beneficiaries are 15 groups.

To date, VetsAid has raised over $ 2 million in support of veterans and their families. 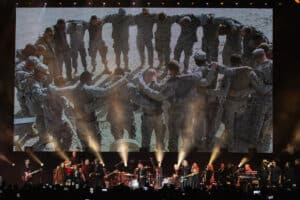 It is a noble cause that extends to the venues that host VetsAid.

As part of the concept, the show is booked into markets that aren’t typically in the mix for all-star events, Christian said. The first was held at George Mason University’s EagleBank Arena in Fairfax, Virginia. In 2018, VetsAid took place at the Tacoma Dome in Washington state. The 2019 show was at the Toyota Center in Houston.

Proximity to military bases, where Joe Walsh made visits to meet VetsAid-related military and women, is part of the decisions on where to hold concerts, Christian said.

There are no visits this year as Covid, the flu and other diseases start to take their toll during the winter months.

Joe Walsh will make a few more appearances in Columbus. On Tuesday (November 8), James Gang is scheduled for an in-store signature at an independent record store. On Thursday (10), he is the special guest at the City Veterans Day Parade and will give the keynote speech on Friday (11) at the National Veterans Memorial and Museum.

The appearance at the record store makes Christian nervous, but the band will sit behind the plexiglass and attendees will be required to wear a mask. The promotion is important to Joe’s support of independent record stores, his son said.

For the concert, the backstage will be conducted in bubble format with COVID tests and masks.

“We strive for the best fan experience and I have looked at both buildings,” he said. “The nation was better equipped for our needs.”

The Big Ten school will still be present at VetsAid. The Ohio State University marching band, among the most award-winning in college sports, will perform outside the arena as ticket holders arrive at the show.

It’s all part of what has become a monstrous event over the past six years.

“I haven’t slept well in three weeks and that won’t change anytime soon,” Christian said. “Joe deserves it and wants to do his best for the veterans. This will be his inheritance. “