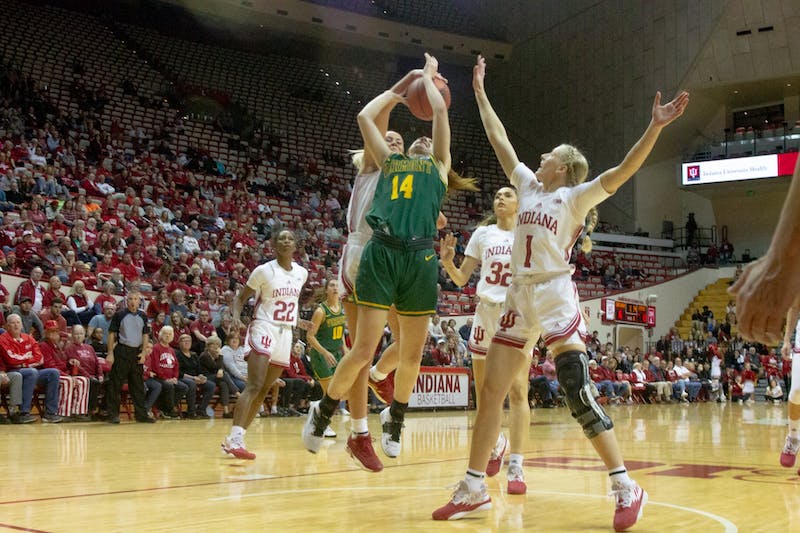 Women’s basketball n. Indiana’s 11 kicked off his season with an 86-49 win over the University of Vermont on Tuesday at Simon Skodt Assembly Hall. After a slow start, the Hoosiers cleaned up their mistakes and were able to blow up their American East Conference opponent.

After the first break in the quarter, the Hoosiers only shot the ball twice and went 9-0 to end the first period 20-12. Five of the points in the race came from junior guard Sydney Parrish and graduate student forward Alyssa Geary. The two players were Indiana’s first substitutes and both were making their Bloomington debut.

Parrish moved to Indiana from the University of Oregon during the off-season after being named Indiana Miss Basketball 2020 in her senior year of high school. She shot 35% deep inside her in her two seasons with the Ducks and showed her shot early Tuesday, scoring her first points with a triple and finishing with eight points. In addition to her score, coach Teri Moren said she was satisfied with how Parrish played on defense, getting a block, four steals and charging.

“We always and always will hang our hat on the defensive side of the ball and so he knew he had to improve to get out on the floor and help us,” Moren said. “One thing Syd is is that she is a great communicator. You know her, she talks constantly.

Geary is also a relocation, arriving in Bloomington after four seasons at Providence College. He scored four points and pulled down four rebounds providing a good defense at the post, particularly when senior striker Mackenzie Holmes was on the bench.

In addition to Parrish and Geary, Indiana played the opening minutes for Cream and Crimson on Tuesday with five other newcomers, led by freshman guard Yarden Garzon, a native of Ra’anana, Israel. In his first ever college game, Garzon equalized Vermont senior guard Emma Utterback as the game’s top scorer with 19 points.

Garzon’s first bucket was a triple midway through the second quarter to give Indiana a double-digit lead forever. He continued with four more scoring from deep throughout the game to help the Hoosiers reach 12 points total of 3, more than the team scored in any single game last season.

Although Parrish, Geary and Garzon played well in their early games in Bloomington, Moren said he thought the team, especially the newcomers, could have played better defensively.

“We certainly have work to do in defense, especially with some of our new faces trying to understand our defensive system,” Moren said.

Making sure everyone knows what they’re doing on defense takes a good deal of practice and chemistry, and Moren said the team is focused on improving that side of the ball.

Despite Moren’s displeasure with the team’s performance at one end of the pitch, Indiana managed to reach the 37-point win and were never significantly challenged by Vermont after the first quarter.

Behind Garzon, Holmes scored 16 points and Berger scored 14 points and recorded eight assists and eight rebounds, both of which were record scores. Major guard Sara Scalia, transferred from Minnesota, was the only other Hoosier in double digits with 11 points.

Indiana are not the same team as the last two years as Tuesday was the first game without former players Ali Patberg, Nicole Cardaño-Hillary or Aleksa Gulbe from 2018. However, Holmes said the new players will add levels to the Hoosiers who they weren’t there in the past.

“We have a lot of different songs, but I don’t think that’s necessarily a bad thing, I think it’s exciting,” said Holmes. “The pieces we have this year are versatile, they are dynamic. So it’s really exciting to practice and keep improving every day and now we’re finally getting closer to games, so it should be a lot of fun to see how things play out. ”

Following her season opener win, Indiana’s # 11 will stay in Bloomington to play another member of the American East Conference, the University of Massachusetts Lowell at 7pm on Friday.

Support Indiana Daily Student to Beat Purdue Student Newspaper, the Exponent, through a donation to the IDS Legacy Fund! Whichever publication raises more money before the Purdue v. Football game. IU of November 26 “wins” the challenge, but all donations go to support student journalism in their respective publications. To help IU beat Purdue and support the IDS, follow this link to donate.