GREENWOOD, Ind. – #13 Georgia Tech Volleyball Beautiful D’Amico And Erin Moss were each selected to the 2022 College Sports Communicators All-District Team for the East Coast region, the CSC announced Tuesday. The dynamic duo at the heart of Tech’s 2022 unit are recognized for a combination of academic excellence and on-court performance.

In receiving the honor, D’Amico and Moss become the first Yellow Jackets to achieve the honor since 2016 (Teegan Van Gunst). Together, the two become the first Yellow Jacket duo to be drafted since 2004 (Jayme Gergen/Lauren Sauer) and the third in the program’s history including 2003 (Kele Eveland/Lauren Sauer). Individually, D’Amico and Moss are receiving their first career accolades from the CSC.

Every student-athlete named to a region’s 2022 CSC All-District Team has maintained a career GPA of 3.5 or higher, as well as on-field status as a major starter or reserve. The seamless pairing topped both benchmarks, each owning top 10s throughout the conference, and helped propel the white and gold to another stellar season. 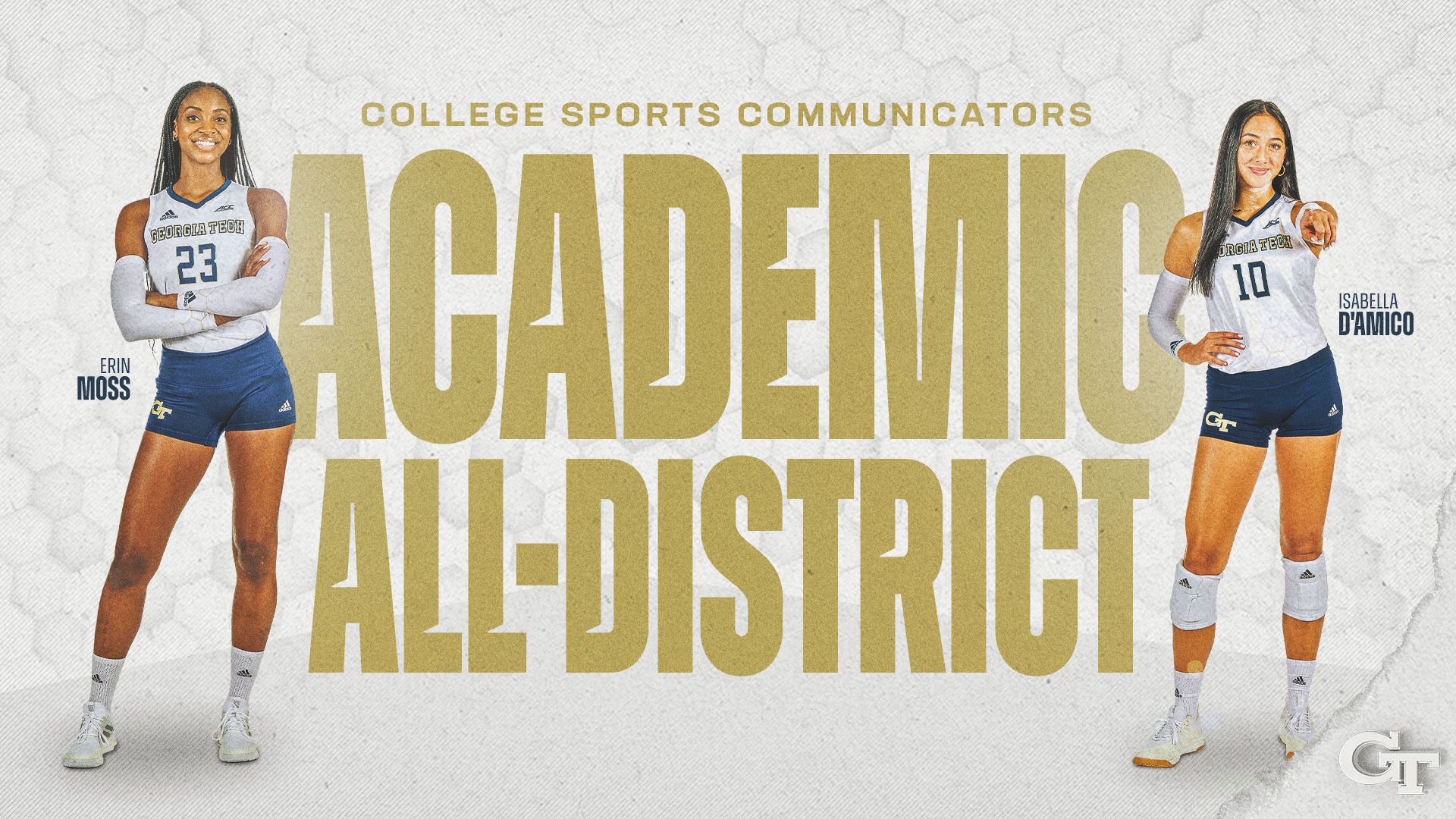 D’Amico orchestrated one of the best bouts in the conference this season as Tech currently ranks second in the ACC in both assists per sets (12.74) and kills per sets (13.69). Individually, the junior setter possesses 10.01 kills per set, good for fourth place in the league this year, as well as 891 assists, which ranks her fifth in the conference on the season. In addition to pulling strings on offense, D’Amico has tallied five double-doubles this year while she has launched on defense with 163 digs and 31 blocks. In specific outings, the Westerville, Ohio native also leads the ACC in three-set games with 45 assists in a sweep of Notre Dame and owns third place with her 41 against Syracuse, accomplishing the same. D’Amico amassed 49 career assists twice in 3-1 wins over NC State and North Carolina, tying for the third-most assists in a four-set game in the league this season in both.

Moss provided a dynamic presence in the center on both sides of the net, leading the team with 89 blocks (18 solo, 71 assisted) at a one block-per-set rate while finishing second on the team with 187 kills. Offensively, Moss has balanced her explosiveness with efficiency as she is also second to The Jackets with a .334 slugging percentage. Across the ACC, that score is eighth overall to date. The Valdosta, Georgia native racked up career highs in both blocks and kills this season, setting her marks with nine blocks (three solo, six assisted) in a sweep of Boston College and following with 14 kills against the Syracuse to an incredible . clips 524.

In a unified effort, Georgia Tech, the Georgia Tech Foundation, Georgia Tech Athletics and the Alexander-Tharpe Fund have teamed up to accelerate scholarship funding for student-athletes with the launch of the Competitive Drive Initiative. The initiative kicks off with the Accelerate GT Match program, in which every new donation to the AT Fund’s Athletic Scholarship Fund made through December 31 will be matched dollar-for-dollar by the Georgia Tech Foundation, up to $2.5 million. If Accelerate GT reaches its $2.5 million fundraising goal, the matching gift would have a $5 million impact for Georgia Tech athletics. To learn more and to contribute online, visit atfund.org/accelerate.